I’ve often thought about what I would personally do in the event of the apocalypse.  Everyone does.  I think most people believe they’ll be fine.  Get a gun, get a truck, get some cool Mad Max clothes.  I’m under no illusion that wouldn’t be fucked.  I have no useful skill set.  I can’t build anything, or fix anything. I’m a librarian. Without civilization to support me, my skill set is useless.

A couple of months ago I got into argument over the internet — okay, okay over TInder — with a woman getting her PhD in English. She vehemently disagreed with me that say, the invention of a new type of more efficient solar panel was of more use than a journal article heteronormaitivity in the works of Cormac McCarthy. She also strongly objected to my saying “postmodernism is the consensus that there is no consensus.”  I stole that quote, though I don’t know from where.  Maybe I was just being a contrarian, but my in as a graduate student in and English program made me wonder if theory wasn’t sometimes, just maybe, possibly, an exercise in bullshitting.

So I wrote a story about a college professor and a graduate assistant surviving after the apocalypse, in any way they can.  They do alright, it turns out. And, being academics, they feel the need to go into a bit more detail about their justifications. 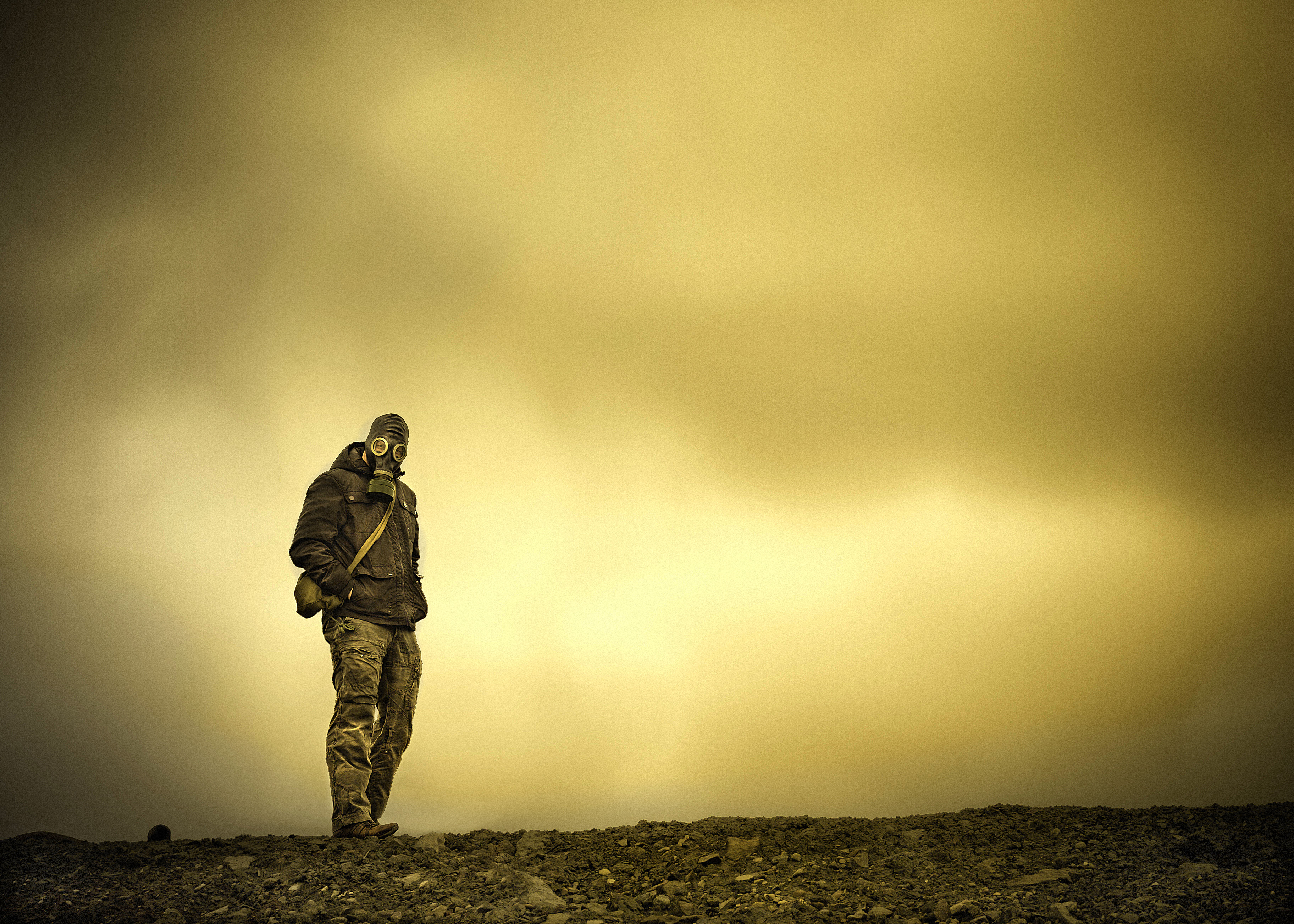 Within months my graduate assistant was laying in tall grasses or plundered gas-stations, watching me lie in the road and we both listened for any approaching cars.  At first we tried things the other way around – thinking a lithesome 20-something prone and helpless on the asphalt would more likely prompt a truck to cease weaving through the stripped-down wrecks and lend a hand.

However, she fairly pointed out that such an arrangement perpetuated the patriarchy through use of the damsel in distress trope.  A tidy solution was for me to play the part of the bait, thus empowering her with greater agency.  Physically, I am well suited for the part – the wounded old man on last legs.

So here I am, on my side and 63 years old, the double yellow line stretching away from my face with quite pleasing symmetry.  I’m angled slightly toward the wrecked Honda in the ditch opposite, and catch the sound of two sharp whistles and three knocks on the hood of the car.

Two travelers on foot.  So many more travel by foot these days.  The thing they always left out of movies about living after the Apocalypse is that gasoline has a short shelf life.  There’s no point in siphoning from wrecked vehicles any more – the gas in their tanks no longer works in an engine.

The crest of the hill we’re below is a mile off, so I keep a close eye on my watch, waiting for ten minutes to pass. I wonder why they’re travelling.  There are settlements, of course.  Survival encampments. It can be hard to catch on there, though.  You need a joe-job skill set.  Carpenters or mechanics or nurses.  None of them seemed to have much use for a tenured faculty member and author of two well-reviewed books of post-colonial readings of 20th century American western writers. They were happy to take on my young graduate assistant, of course, but Sam’s still working on her thesis and wouldn’t leave me.

There are only three types of people you find travelling the roads these days. The first are the safest – they’re out scavenging for supplies for a camp.  The second are unpredictable.  They’ve been turned away from a camp, or fled when their camp was overrun by bandits. They’re looking for a home.

Five minutes gone.  They’ll be wondering if I’m alive or not.  She hasn’t hit the clicker so I know they’re not visibly armed. By that I mean, not currently carrying weapons.

After we were turned away from the third camp we realized the horrible truth of this world. That academic labor had become devalued.  That, given the choice, survivors would rather satisfy base needs than learn how to think.  We realized we had a sacred duty to preserve our accumulated knowledge for the next world.  I took the first kill, bludgeoning a traveler to death with a hammer.  We had no skill in butchering, then.

So the swirling dust and ash of blackened cities yields to our daily miles.  We camp in the cabs of empty semi-trailer trucks. At night we hold poetry readings by caustic orange flare light. And of course we write mostly in regard to the terrible irony and our human condition, and leave our poems and essays wrapped triple in plastic, high in dry places, so the next world would know.

Ten minutes gone. I raise myself half onto my left arm and collapse again.  My backpack is nearby, contents scattered and picked through. A victim of bandits who somehow survived.

I hear one of them, a man. “He’s alive!” and a minute later footsteps at a trot.

He stops short and calls out.  About 50 yards off, by the sound of it.

I don’t respond. Lay limp.  Too weak to move. Nonthreatening.

This time I stir, just a little.

A few minutes pass and I hear footsteps again.  The wind picks up a bit. The sun is nice on my face, warm in this still-chilly early April.

He’s very near me now, behind and approaching. Sam hasn’t fired yet.  Is the man’s companion covering him? That’s smart.

A hand on my shoulder. The crunch of heavy boots.

“Hey. Can hear m–” His voice is cut off by the crack of the AR-15. He slumps across me. In a moment Sam is across the ditch and beside me on one knee. Firing position.  After a minute she lowers her rifle and shoves the body of the man aside and I can sit up.

“Ah.” We’ve had several long discussions about the merits of sparing people of color. On one hand, it reeks of the White Man’s Burden.  On the other, to kill him would have perpetuated racial exploitation.  We’ve written several essays on the matter along the road, left them triple sealed in freezer bags and duct tape.

We drag the body off the road and Sam sets about him with her Ka-bar while I go through his backpack. I admire her skill and speed. Singular focus and intention.  Our morning yoga practice has done wonders for her presence in the moment.

She’s changed so dramatically. I remember once, at the beginning, she had doubts.

“Is our knowledge really worth it?” She asked. “Are we doing this for the next world, or for ourselves?”

“Ah, “ I said, peeling a strip from the thigh of the mechanic we’d killed the week before. “This meat will only nourish our bellies. But our poetry? That will nourish the world’s soul.”